Mass today is preceded by the liturgical commemoration of the Lord’s entry into Jerusalem, which in its solemn form includes a procession. The congregation, holding palm branches, assembles in a place distinct from the church (here in our monastery that place is the far end of the cloister that leads to the church); the palms are blessed; the Gospel of the entry into Jerusalem is read; and the procession makes its way to the church. This beautiful ceremony opens with the singing of an antiphon whose text is given above.  The gospels tell us that the crowds acclaimed Jesus with these words as he entered Jerusalem, riding on a donkey, a few days before his passion.

The words come from psalm 117, which was used in the Jewish liturgy at the Feast of Shelters. “Hosanna” means “Save us” or “Grant salvation”, but it is also an acclamation of praise and trust in the one to whom it is addressed. In this case it was addressed to the “son of David” who would come “in the name of the Lord”: the future Messiah, the one to whom the people of Israel looked forward, who would restore the Davidic kingship and re-establish political independence together with religious, economic and cultural glory.

When the Jerusalem crowds sang and shouted these words all around Jesus, they were acclaiming him as the Messiah and appealing to him as that expected political leader; they were calling on him to liberate them and overthrow the occupying Romans. They got it so right: he was the promised Messiah. But they also got it so wrong: their vision of his mission as Messiah was not just too limited and narrow, it was altogether off the mark.

How do we sing these words today? We know what the people in Jerusalem did not: we know the kind of kingship that Jesus has come to establish. It is not of this world, not a kingdom in the political sense; what he overthrows is not another nation, but the power of evil; the freedom he brings is the freedom to walk the path of humility and lowliness, not a freedom that leads to worldly grandeur and riches. Saint Augustine put it like this: What could it profit the king of the ages to become a king on earth? Christ was not king of Israel to exact tribute, to fit out an army, or to subdue visible enemies. He was king of Israel to reign over souls, to make provision for eternity, to bring believers to the kingdom of heaven if they would put their trust in him and love him.*

When we acclaim Jesus today, calling out to him, “Hosanna, Son of David; come in the name and the power of God and save us!” we imbue these words with their full meaning.  We know the kind of Messiah that Jesus is and we commit ourselves to follow him, to take up the gentle yoke that he places on us, to stick to him and his ways through thick and thin. In acclaiming him and calling on him we commit ourselves to following an alternative path to the one which points to earthly success.  Let us sing these words with trust and love, both as a personal expression of faith and as the sentiment of the whole Church.

Here is the Latin chant version of this antiphon: 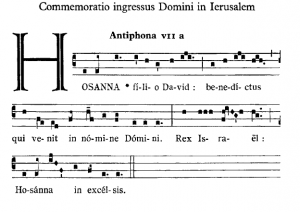 You can listen to it here: