HISTORY of our PROPERTY | Glencairn

History of our Property 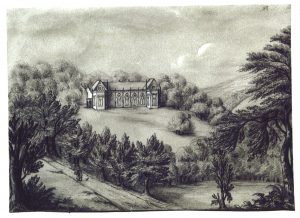 Glencairn Abbey land was, in the 7th century, part of the great monastic settlement of St. Carthage of Lismore.  The Viking raids of pillage and burnings in the 9th and 10th centuries were eventually followed by the plundering Normans. However, in the 12th century Christian O’Conarchy, of Mellifont Abbey, became the first Irish Cistercian to be Bishop of Lismore.

Through the centuries, wars were fought between the Butlers of Ormond and the Fitzgeralds of Desmond.  Eventually, Richard Boyle, the ‘Great Earl of Cork’ gained the lands.  He built several castles, and one of them, built in 1609, and occupied by his sister Margaret and her husband Piers Power, was Ballygarron (or Ballengrane), on the site now occupied by St. Mary’s Abbey, Glencairn.  Part of the original castle, a cellar, still in use, and some walls, remain from 1609 and have been incorporated into the present building.

In 1695, Richard Gumbleton, a Cromwellian soldier who had property in Curraglass near Tallow, acquired what remained of the house and land.  He rebuilt the house; the monastery’s South Wing dates back to this time, and he changed the name to Castlerichard.

In the 18th and 19th century the West and East wings were added, and the name was changed once again, this time to Glencairn Abbey.  Twice during the centuries, a daughter inherited.  In the early 1800’s Lavinia Gumbleton married Henry Amyas Bushe of Kilfane; towards the end of that century, Frances Anne Bushe married Ambrose William Bushe Power.  The Power family continued to live in Glencairn Abbey until 1922, when the property was put up for sale.