This year’s General Chapter of our Order of Cistercians of the Strict Observance opened in Assisi, Italy, on Monday 7th February 2022. This was the first General Chapter to take place in the last five years, having been postponed for two years due to the pandemic.  The unprecedented proposal to gather for two sessions this year, 2022 in order to elect a new Abbot General was safely and successfully and carried out with a majority of our superiors able to attend.

On the opening day of the General Chapter, The Abbot General, Dom Eamon Fitzgerald, a monk of Mount Melleray Abbey in Ireland, having turned 75 in 2020 presented his resignation after his service for the past fourteen years in the role. Also on the first day, the numerous brothers and sisters who had been nominated to carry out the work of interpreting, translating, acting as secretaries and serving in other necessary roles were introduced in the aula.

Mother Marie Fahy, Abbess of our community, served on the Central Commission which facilitated the meeting. Two more of our sisters from Glencairn also attended the meeting in different capacities: Sister Clothilde Anamizu served as Japanese – English translator and Sister Fiachra Nutty served as coordinating secretary. 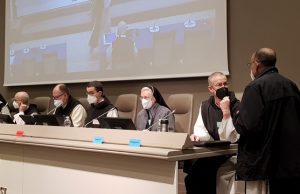 On February 11, 2022, following the preparatory days of reflection, prayer and sharing, the capitulants completed their discernment and elected Dom Bernardus Peeters as our new Abbot General. The election was followed by the singing of the Te Deum by all in attendance and a celebratory festive lunch marked the occasion afterwards!

Dom Bernardus was born in Heerlen (The Netherlands) in 1968. He entered the Abbey of Tilburg in 1986, made his solemn profession in 1991, and was ordained in 1997. At the moment of his election, he was Abbot of Tilburg and President of the NED Region of our order.

On Monday 14th February, Sister Eleanor Campion of Glencairn was elected as one of five members of the new Abbot General’s council. She will join the Abbot General and her fellow councilors at the order’s Generalate in Rome for a six year term. We pray for God’s blessings on Sister Eleanor in her new role serving in our order.

The General Chapter Part 1 concluded on Wednesday, 16th February, following final decisions and a very positive evaluation of the Chapter. Part 2 of the General Chapter will take place in September of this year, in what has been a very unique period for us all due to the restrictions imposed by the pandemic.

A Year in the Life of Glencairn Abbey: Looking back at 2021

First Corinthians: Words of Wisdom for our Cistercian Communities Today
Scroll to top