Living near the ruins of the 12th century Dore Abbey, a Cistercian monastery in Herefordshire founded in 1147, it was here, as she sat in the silence of the ruined cloisters that the historian and spiritual writer Esther De Waal first experienced the spirit of the Cistercian Order. It was from the inspiration of this place that flowed from her pen the book “The Way of Simplicity: The Cistercian Tradition” published in 1998. “The Way of Simplicity” was then the latest in a series of books she had written on the Rule of St Benedict and Benedictine spirituality since the early 1980’s, publications that were so well received and highly esteemed both by lay people and Benedictine and Cistercian monks and nuns alike.

As a laywoman and a busy wife and mother of four sons, Esther De Waal had felt since her first encounter with the Rule of St Benedict that the ancient monastic rule had so much to say not just to monastics but also to families with its emphasis on seeking God in the ordinary and simple realities of daily life. In her earliest book “Seeking God” (1984), she stressed that the division of reality into sacred and secular was alien to Benedict’s vision. She wrote: “St Benedict is saying that material things are sacraments, symbols that reveal the goodness and beauty of their creator, and thus we are brought back time and time again to that phrase: “the monk will regard all the utensils and goods of the monastery as sacred vessels of the altar.” (Rule of St Benedict Chapter 31).

The last time Esther De Waal visited Glencairn was in 1998, and we were so delighted to welcome her here again, some of us meeting her for the first time, to visit, to talk and to reflect together on our shared Benedictine, Cistercian and Celtic heritage, spiritual traditions that she has so immersed herself in both as a writer and as a Christian and woman of prayer throughout her life.

In her latest book, “The White Stone” (2021), written during Covid, she reflects on the changes and losses of growing older and on the spiritual practice of letting go. “If only we would stop and look and see into the heart of things and try not to possess them”, she remarked in our conversation here at Glencairn. This reverence and respect for life in all its humdrum aspects that is so characteristic of St Benedict in his rule of life are clearly central values that mark both De Waal’s writing and the spirituality of the woman herself. We were enriched by this special moment shared at Glencairn with a beloved writer and sister in the faith. 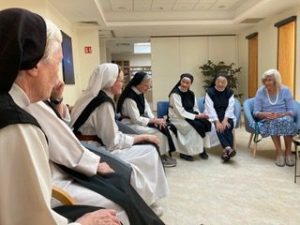 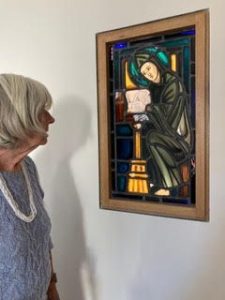 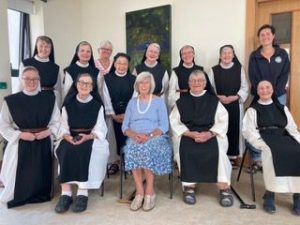 Feast of the Dedication of Glencairn Abbey Church 2022