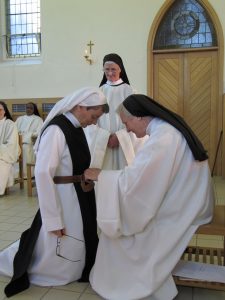 I entered Glencairn on the Feast of the Epiphany 2013 at 40 years of age – obviously a late vocation. In truth God had been calling a long time but my answer was always no.

I come from a traditional catholic family but had drifted from the church in my late teens; mostly I still went to mass (less hassle than explaining why not) and I didn’t pray. I think I still believed that God existed but he was irrelevant in my life. I wanted to be self-sufficient.
After college I worked in IT which challenged me and was busy. However I wasn’t motivated by career or money or possessions. I’m not saying that as a virtue, I just wasn’t. Marriage or family too just never seemed to be for me. I was drifting through life. In my late 20s I realized how empty my life. And in one moment, I knew that God adored me and he was the answer to my need. I began to pray and read and go to daily mass and frequent confession. I didn’t join prayer groups or the like, I’ve never been much of a joiner.

While God was now a huge part of my life, it didn’t still have a plan. The thought about religious life kept
lurking but to me Nuns were the teachers and nurses and missionaries, certainly not introverted computer
programmers! God really should call “suitable” people! I resolutely avoided thinking about the matter and
continued drifting. But God persists. I never visited a convent or monastery but was familiar with Mount
Mellary from hill walking and knew they’d nuns too so I went there to see. And there, I saw ordinary men
praising God together as best they could and I thought “I could do this”. Admittedly not the highest
motivation but it was my Yes.

So I visited Glencairn, attracted by the Divine Office, the balance of the life (work & prayer), the beauty of the place, the kindness of the sisters and that they’d a real purpose in praising God and praying for the
world. I’d already procrastinated enough and knew I was coming. It was all grace. Giving up the work which I’d depended on for so long for security was surprisingly easy. And I had no idea what I’d do if it didn’t work out but that I couldn’t go back to my old life.

My family and friends was supportive once they got over the “bombshell” as Mama called it. Needless to say
they didn’t see me as someone who’d “join the nuns” any more than I did.